Interfaith Ministries for Greater Houston’s Refugee Services department, in conjunction with the U.S. State Department and Episcopal Migration Ministries, resettles legal refugees fleeing their homeland in fear of political, social or religious persecution. IM helps refugees from around the world make new lives in America. Over 90% of the clients we serve are self-sufficient, productive members of the community within 6 months.

Today, there are an estimated 22.5 million refugees, over half of whom are under the age of 18.  Women and children constitute the majority of these displaced people. Each year, hundreds of these refugee families arrive in Houston through Interfaith Ministries.

In the past 30 years, Interfaith Ministries’ Refugee Services has served refugees from over 30 countries.

Interfaith Ministries provides refugees with housing when they first arrive. Consider hosting a donation drive for household items, please check our wish list for the items in demand. 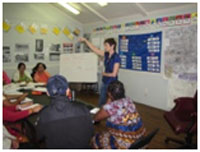 ESL classes are provided through a partnership with the Bilingual Education Institute (BEI). As a family or employment mentor you can help the refugee family by practicing English them each time you interact with them.

Interfaith Ministries helps children enroll in school so that they can continue their education. Consider holding a school supply donation drive, for more information please reach out to Elena Korbut – Community Engagement Coordinator at ekorbut@imgh.org. 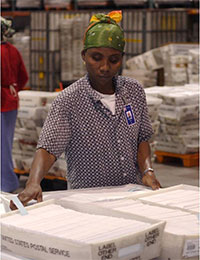 It’s important that refugees become self-sufficient and productive Houstonians. Interfaith Ministries helps refugees find employment and take part in the American Dream. If you would like to help provide employment to refugees, please use the form. For more information, please contact Elizabeth Meza, Employment Coordinator at emeza@imgh.org

Get your house of worship or community organization to sponsor a family. Follow each step of the resettlement process, from picking them up at the airport to celebrating their completion of the program. A six-month commitment.
For more information, contact Director of Refugee Services, Ali Al Sudani.

Collect basic house wares, school supplies, or other items for newly arrived families. Individual donations may be dropped off at Interfaith Ministries for Greater Houston. Pick-ups are available for some items. See our wish list.

If you would like to Host a Drive, please click here for materials to help you with your drive.

IM helps refugees from around the world become productive citizens. You can help by providing a job to a refugee or give networking advice. Refugees come to the United States with various professions and skills and are looking to work hard for the American Dream.

Give refugees what they want most — the chance to secure a good job. For more information contact Ali Al Sudani.

The goal of Interfaith Ministries for Greater Houston Refugee Services Program is the successful resettlement of newly arrived refugees into the greater Houston area. Available volunteer opportunities include:

Click here to learn more about our volunteer opportunities.

Who is considered a refugee?
Refugees are individuals who have fled their country due to persecution based on race, religion, nationality, political opinion or membership in a certain social group. A refugee is approved and processed outside of the US and enters with permission to stay.

What is the breakdown of the refugee population?
Currently there are an estimated 13 to 15 million refugees throughout the world, with women and children being the majority.

What can I do to help refugees resettling in Houston?
IM relies on individuals and groups to assist with welcoming tasks. For more information on how you can help, please visit our Volunteer Opportunities page. 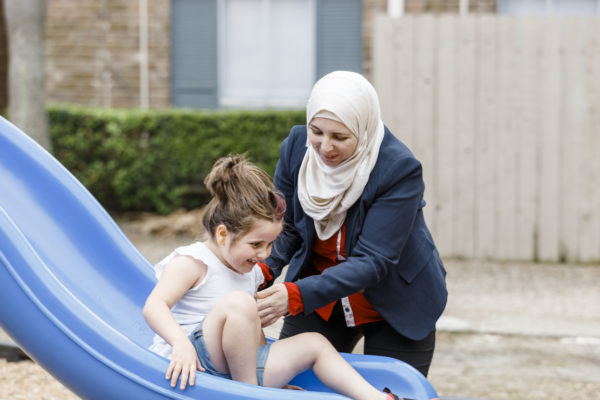 Living in Homs, Syria with her husband and young son, Dayana Halawo loved her life. She belonged to a neighborhood cooking group, shopped at the market with her mother and was preparing for the birth of a second child.

A civil war in her country was farthest from her mind, but as the fighting came closer, Halawo and her family experienced what is now a common casualty in Syria: their house was bombed and destroyed. Fortunately, they were out that day, but the traumatic event forced them to flee with only the clothes on their backs. They left behind their family-owned cosmetics store and friends, and literally ran from a series of unexpected wars and violence for the next five years.

Just prior to immigrating to crossing the Syrian border, corrupt authorities detained them and threatened to behead Mohammed until the family could prove they were innocent people and trying to find safety. Under tremendous stress, Halawo gave birth to a daughter.

The family fled to Lebanon and then to Jordan, where refugees are not allowed work and their children are not allowed to attend public school. News of better jobs in Cairo took the family to Egypt, a country where they felt safe until the Arab Spring brought about another round of violence. Fleeing another war, the family returned to Jordan and waited in precarious conditions for a county to welcome them as refugees.

After landing on U.S. soil in 2016, Halawo sobbed uncontrollably from both sadness and relief. She left her parents behind in war-ravaged Homs, but her children were now safe.

When IM’s Refugee Services drove them to their apartment in southwest Houston, Halawo stood in the doorway in disbelief. “There were couches and beds in the apartment!” she cried. “We spent years in Jordan sleeping on the floor.”

After she and her family got settled, Halawo wanted to give back to the Houston community. When Hurricane Harvey decimated the city in August 2017, Halawo saw an opportunity. “Everything was destroyed, but it was by water, not war,” she said. “I knew I could safely help people.”

Halawo volunteered to pick up food from a local Middle Eastern restaurant and distribute it to families in shelters. At a particularly overcrowded shelter, families asked her if she knew of other places to go. “Come to my apartment,” she offered.

For weeks, Halawo’s family welcomed two families into their home where they lived in cramped conditions until FEMA could provide suitable housing for their guests.

“I didn’t know them,” Halawo said. “But I had to help them. So many people have helped me.”