Interfaith Ministries for Greater Houston (IM) hosted the dedication and VIP reception for the opening of the Brigitte and Bashar Kalai Plaza of Respect at its 3303 Main Street headquarters in Midtown on Tuesday, April 2, 2019. More than 200 guests including donors, elected officials and supporters recognized the interfaith work of three Houston faith leaders – affectionately nicknamed the “Three Wise Men” –Archbishop Joseph Fiorenza, Rabbi Samuel Karff, and Reverend William A. Lawson.

IM Board of Directors Chair Shaukat Zakaria and Immediate Past Chair Paula Sutton welcomed guests and introduced City of Houston Mayor Sylvester Turner. Turner thanked IM and its supporters for creating a place to celebrate the city’s rich diversity and to educate the community about the many faiths in Houston. IM CEO Martin B. Cominsky then addressed guests and thanked the Kalais for making the Plaza of Respect possible as a symbol of the heart of Houston in the heart of Houston that will host and bring diverse groups together to foster respect, dialogue and service. He also recognized the major sponsors who were instrumental in making the Plaza possible – specifically Brigitte and Bashar Kalai, Patti and Richard Everett, the Clark and Charlene Thompson Foundation, and Shell.

Cominsky then introduced the Kalais, who both expressed their support for the work of IM. The Three Wise Men took turns at the microphone to share their shared experience of interfaith friendship and collaboration. Guests were then treated to a performance by Dee Dee Dochen and Mike Kahn of the song, “The Prayer”, dedicated to the Three Wise Men and the Kalais.

The Rev. Greg Han, IM Director, Interfaith Relations and Shariq Ghani presented a blessing of the Plaza and guests enjoyed a welcome video before the curtains were lifted to reveal the Plaza. All guests were then invited to explore the Plaza and interact with the Three Wise Men via a video application.
The Plaza was initially designed by Gensler’s Ryan Marchesi and Kristopher Stuart, and generously completed by PBK Architects. The video experiences were produced by VISION.

The Banner of Respect is a horizontal metal banner, sponsored by Shell, which will grace the top perimeter of the IM building at 3303 Main and features the word “respect” in 13 languages carved from the metal and illuminated from within. It will overlook the new Plaza and be visible as part of the Midtown skyline.

Thank you to our leading Plaza donors:

Naming opportunities are still available on the Plaza:

For more information on making a gift to the Plaza Fund, please contact Maria Magee at mmagee@imgh.org or at 713-533-4924. 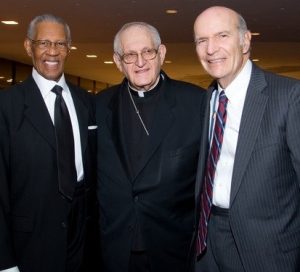 The Reverend, the Archbishop and the Rabbi are a respected trio of friends who have worked with each other, in pursuit of the common good, for over three decades. They have championed a variety of causes, from tearing down shantytowns under bridges to halting the “school to prison pipeline” that treats juvenile misbehavior as crime, from fighting anti-Semitism to condemning the bombing of a local mosque.

Archbishop Fiorenza marched from Selma to Montgomery and oversaw the construction of Houston’s new cathedral. Rev. Lawson invited Dr. Martin Luther King, Jr. into his parish when many black clergy scorned him, and was let out of jail by a Houston mayor to calm down some civil rights rioters. Rabbi Karff piloted the nation’s oldest rabbinical organization and helped build Chicago’s landmark Conference on Religion and Race. Together, they do much more.” (Fraser, Jayme. “Trio quietly guides Houston’s conscience and policy.” Houston Chronicle. Sept. 30, 2013.)

In the 1980s, during Houston’s oil bust the three friends came together again to help the growing number of homeless in our city. Along with other religious leaders, they created a vision that became what is today the Coalition for the Homeless. 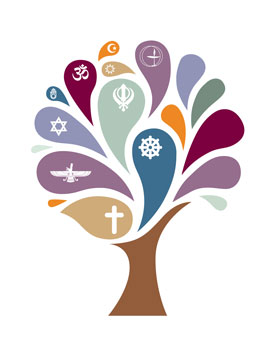