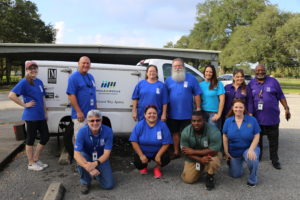 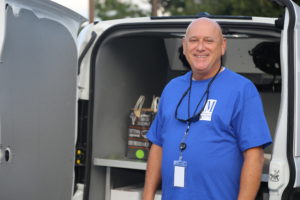 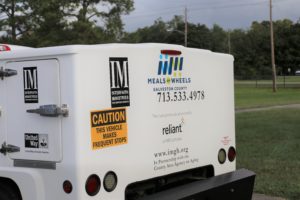 In October 2017, Interfaith Ministries was proud to officially launch Meals on Wheels Galveston County, after being invited by the County to assume responsibility for their clients. We are now serving over 300 clients in Galveston County, having greatly reduced the waiting list. In our first full year of operation, we increased the number of clients served by 104%!

In addition to fresh weekday meals, services include a breakfast meal program for those seniors who are particularly frail and access to other services through IM’s Client Services department. It would also allow for expansion of IM’s aniMeals on Wheels program in Galveston County, which IM currently operates in partnership with the Galveston Island Humane Society. This program provides dog and cat food to feed seniors’ pets. IM is also working on establishing a strong volunteer network to expand service to the county.

Want to get more involved? Click the volunteer button above! 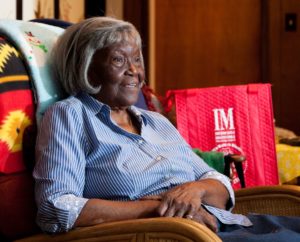 At 92 years of age, Jerlee’s diverse resume includes titles like Master Gardener, X-Ray Technician, Sunday School Teacher, exemplary American Cancer Society Volunteer and much more. Her home is filled with plaques and certificates recognizing the impact she has made on her community.

Jerlee was born in the 1920s in Fort Bend County, on a creek that is now part of the George Ranch Historical Park.

“We had such a happy family,” Jerlee recalls. “Three boys and three girls. We were very poor, but we were rich. My mother was a woman of wisdom and she could take anything and make a meal. She would sew, she would quilt, she would cook, and I never went hungry.”

The youngest of six children, Jerlee developed a love of gardening at a young age by watching and working alongside her mother. In 1944, during World War II, Jerlee dropped out of high school to take a wartime job in a cotton shed. She married at 18 years of age and had a son, but when he was old enough to attend school, she went back to Central High School in Galveston, finished her studies and graduated.

In 1947 she moved from Galveston to Texas City. She joined the newly organized Progressive Baptist Church in 1948, and over the years served as an usher, Sunday School teacher, and chaperone for youth trips around the United States. Texas City has been her home for more than 70 years now—and you’ll still find her serving as an usher at Progressive Baptist Church, where she is the only living, active member from the church’s founding days.

In her 30s, Jerlee met the love of her life—Lawrence Owens. He had served in the Army during World War II, and went on to have a 40-year career with Union Carbide. The couple dreamed of building a home, and with the help of Lawrence’s employer, they did. Little by little they built their home—and the gardens that went with it.

In 1982, Jerlee completed her studies to be a certified Master Gardener. Since then she has been recognized numerous times for her work, including a Lifetime Achievement Award presented in 2016 by the Galveston County Master Gardener Program.

But Jerlee’s life has seen difficult days as well. Her only son died in 1983 at the age of 39, six months after being diagnosed with cancer. Many years later, Lawrence had a stroke and then a heart attack; shortly after that, Jerlee needed surgeries on her knee and her spine.

“That’s when they started us on Meals on Wheels,” Jerlee says, “and thank the Lord they did.”

Lawrence passed away in 2012, just two days after their 50th anniversary. “We were together a long time,” Jerlee says. “Wasn’t too long, though. I miss the old boy.”

Jerlee lives alone now, and moving around her home can be difficult since she has two types of arthritis as well as fibromyalgia. So she is very grateful for the support provided by Meals on Wheels.

“I have to care for myself, and sometimes I’m just worn out,” she says, explaining that she monitors her own vital signs for the medications she takes.  “When I get Meals on Wheels that means I can stay in my home and have warm meals, or just put it in the microwave. That means a lot.”