A WEEK OF MAJOR RELIGIOUS OBSERVANCES

Previous Next
A WEEK OF MAJOR RELIGIOUS OBSERVANCES

This week marks the observance of major holidays in two religious traditions.

PASSOVER began last night at sunset, April 10th. Passover lasts either seven or eight days, depending on the tradition.

“Passover, or Pesach, as it is called in Hebrew, commemorates the deliverance of the children of Israel from over two centuries of Egyptian bondage, and recalls their mass exodus from Egypt about 3300 years ago. The story of Israel’s increasingly oppressive servitude and suffering, the Divine mission entrusted to Moses and his brother Aaron, their untiring efforts to secure the release of their people, the stubborn resistance of the Egyptian Pharaoh, the series of Divinely ordained catastrophes that eventually caused Pharaoh’s temporary change of heart, and of the Israelites’ escape—are all recounted in Exodus, chapters 1-15. This event became the focal point of Jewish history because it crystallized the Jewish national identity as a free people, and also because the lessons gained from the experience of Egyptian slavery and redemption provided a powerful basis for many important concepts of the Jewish faith and ethic” (Donin, To Be a Jew, p. 218). Key text: Exodus Chapters 1-15. 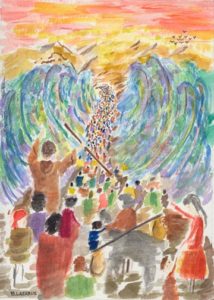 The centerpiece of the Passover observance is the highly symbolic and communal meal known as the seder (Hebrew for “order” or “arrangement”). Interspersed throughout the telling of the Exodus narrative are symbols of the story: wine, matzah (unleavened bread), bitter herbs, a vegetable (often celery or parsley), an egg, a shankbone, salt water, and a mixture of apples and walnuts that has been spiced with cinnamon. As the story is read from the religious text known as the Haggadah (from the Hebrew word “to tell,”), the narrative of the movement from bondage to freedom comes to life, as story and symbol are woven together over the course of many hours. Both adults and children have a place at the Passover seder, as Passover brings together families and communities to be, once again, in the words of theologian Stanley Hauerwas, a “story-formed community.”

Key aspects of Passover are the observance of the Seder as well as the avoidance of any leaven or any food with leaven for the seven or eight days of the holiday.

This week will also be Holy Week in the Christian tradition. As I mentioned in an email last month, Easter for both Western-based Latin churches and Eastern-based Orthodox churches will be this Sunday, April 16th.

Last Sunday was the Sunday known as Palm Sunday, which celebrated Jesus’ triumphal entry into Jerusalem. Events this coming Thursday, Friday, Saturday, and Sunday will complete the narrative. Many churches celebrated Palm Sunday with a procession and with the waving of palm fronds. Traditionally as well, these palms are supposed to be burned, and those ashes become the ashes used during the following year’s Ash Wednesday service. Key texts: Matthew 21, Mark 11, Luke 19, John 12. 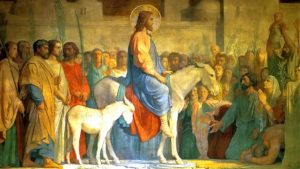 Thursday night is “Maundy Thursday.” Coming from the Latin mandatum meaning “command,” (English words like “mandate” and “mandatory” come from the same root), Maundy Thursday is the night Jesus celebrated what Christians call the “Last Supper,” the source of contemporary Christian communion rituals. In Jesus’ Jewish context, he was celebrating the Passover meal. Interestingly, one Gospel, the Gospel of John, has a last supper, but does not have Jesus instituting the ritualized language of communion. Instead, Jesus performs a foot-washing and also gives the disciples a new commandment: that they “love one another” (John 13:34). That’s the new mandatum. Key texts: Matthew 26: 17-30, Mark 14: 12-26, Luke 22: 7-39, and John 13.

Friday is Good Friday, and is the day Jesus was crucified. Many Christian traditions have a service, ranging from very short to hours-long, re-telling the narrative of Jesus’ arrest, trial, and death. This narrative has also been set to music many times over the centuries. Key texts: Matthew 26-27, Mark 14-15, Luke 22-23, John 18-19.

Saturday is Holy Saturday. Many churches often have a late night “Easter Vigil” that carries from Saturday night into Sunday morning, and thus people are in church to celebrate Easter as Saturday turns to Sunday. In the early church, this was the only day of the year baptisms were performed, and baptism was the end ritual of a lengthy catechetical process.

Sunday the 16th is Easter, the day Christians celebrate the resurrection of Jesus from the dead. Key texts: Matthew 28, Mark 16 (note both the shorter and longer endings), Luke 24, John 20.

Note that each Gospel account has a great deal in common, but each also contains key narrative and theological differences that have been the source of study for centuries.