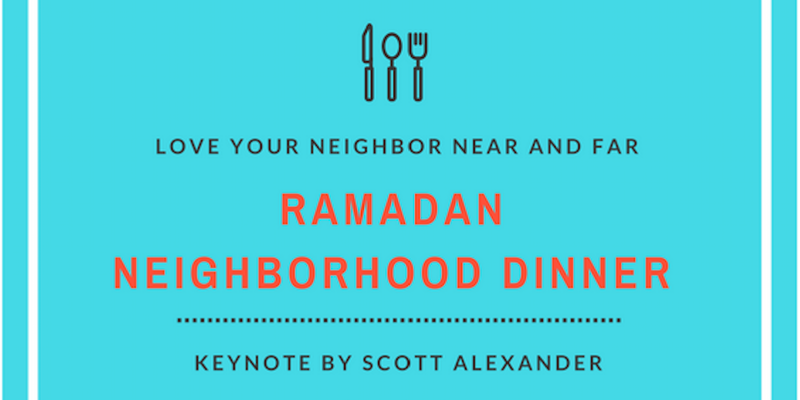 The Ramadan Neighborhood Dinner is a long tradition of Dialogue Institute Southwest for many years where people of various faiths meet their neighbors and friends at friendly environment to share a meal.

Ramadan is the ninth month in the Islamic calendar, during which fasting from dawn to dusk is observed by Muslims all over the world.

Key-note Speaker for this year’s program will Dr Scott Alexander.

Associate Professor of Islam ic Studies and Director of the Catholic-Muslim Studies Program
M.A. and Ph.D. in the history of religions (Islamic studies), Columbia University, NY

Scott is the author of a number of articles on Islamic history and religion and Christian-Muslim Relations published in scholarly journals, edited collections, and encyclopedias such as the Encyclopedia of the Modern Middle East (Macmillan, 1996) and the Encyclopedia of the Qur’an (E.J. Brill, 2001-2005). He has also authored many online blog posts and op-ed essays addressing issues of Islamophobia, and has been featured in a number of videos such as the Knowing and Loving Our Neighbors of Other Faiths series (Work of the People, 2010). His most recent scholarly research focuses on the role of triumphalism in Christian-Muslim Relations and deals with the inherent contradiction between religious claims to universal truth and the religiously motivated desire to impose this truth on others as a means of political and cultural domination.

In addition to sitting on the editorial board of The Journal of Islamic Law and Culture, Scott is a regular consultant on Catholic-Muslim relations for the United States Conference of Catholic Bishops. He also is a member of the advisory boards for the Martin Marty Center for the Advanced Study of Religion at the University of Chicago, the Lake Institute on Faith and Giving at the Indiana University School of Philanthropy, and the Alliance for Shared Values (New York City), the Niagara Foundation (Chicago) and the Antalya Kültürlerarası Diyalog Merkezi (Antalya, Turkey).