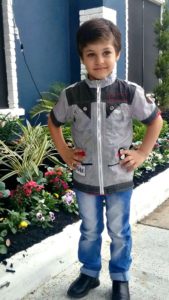 Six-year-old Hani was living in Damascus with his family when the war started. One day, bombing broke out near his home. His dad was in the city and unable to return home because of all the explosions. The walls and ceilings rattled and debris kept falling from the ceiling! Hani was terrified! Fearing for her children’s lives, Hani’s mom made the children stay in a closet until the bombing finally stopped the next morning. However, the gunfire continued. Luckily, Hani’s dad made it home safely during a short ceasefire. Fearing for her family’s safety, Hani’s mom decided that her family had to leave their home to find someone safer. They immediately left and found a town where there was less fighting and gunfire.

Hani and his family lived in an old school house for 11 months, but they were safe. Until the war started approaching their new home. Once again they had to leave. Hani’s parents took a taxi to Lebanon and then flew their family to Jordan, to safety. After much waiting, earlier this year they finally made it to their new, permanent home in Houston.

On Saturday June 10, 2017, IM is inviting volunteers to help assemble care packages for refugees like Hani and his family as part of IM’s Eid celebration.  These packages include personal care items and household goods. IM needs 100 volunteers for this event, which runs from noon to 2 p.m. at IM’s offices, 3303 Main St., Houston 77002. To register to volunteer go to:http://support.imgh.org/site/TR?fr_id=1100&pg=entry

Hani hasn’t started school yet, but he enjoys going to the library with his friend Candy, a volunteer from IM. He really enjoys all the educational games at the library and makes friends there easily. Most of the games are in English, which is challenging for Hani, but he is a smart boy and picks them up quickly with Candy’s help. He just started speaking full sentences in English and continues to learn more words every day!