The May 10 event at the Hilton Americas touched an audience of more than 400 people with moving live performances, prayers that melded together multiple faiths, and special tributes to four IM volunteers who showed extraordinary valor during Harvey by assisting Meals on Wheels (MOW), Refugee Services (RS), Interfaith Relations & Community Partnerships (IRCP), and Volunteer Houston (VH).

As the keynote speaker, McIngvale insisted he did not need special recognition for his good deeds during Harvey – when he opened the doors to his stores and offered his showrooms full of mattresses and furniture to Houston’s displaced population – an act that brought him national attention and praise. Rather, he spoke of the values he learned from his parents, the importance of paying it forward and emphasized the fact that all people, regardless of their particular faith, deserve to be treated with respect.

His words were echoed by Emmett and Turner, both of whom shied away from taking credit for rescuing 60,000 people during the storm. They emphasized the heroic efforts of hundreds of civil servants – some who died while trying to rescue people from high waters.

IM President and CEO Martin B. Cominsky, who presided over the event, spotlighted MOW volunteers Lauren and Chad Walters, owners of Electrical Tech Services, who offered their company’s large trucks to help rescue senior clients; Tehmina Masud, an RS volunteer who raises money and helps refugee families acclimate to their new city as seamlessly as possible; Jeff Nuckols, senior vice president of Frost Bank, which have $50,000 to IRCP to help congregations and their members affected by Harvey; and Arun Gir, executive director of iEducate and a VH client who relied on VH’s college-aged volunteers to help tutor children who were displaced from their schools during Harvey.

All honorees received medals and overwhelming applause from the audience, which included the gala’s honorary chairs, Maria and Neil Bush; the presenting sponsor, Shell Oil Company;Brigitte and Bashar Kalai; Sippi and Ajay Khurana; Nihala and Shaukat Zakaria, IM Board Chair; the Zandstra family; Dr. Bimla and Swatantra Jain; the Subramanian family; and representatives from Frost Bank, CenterPoint Energy and Valley, an Elior Company, among others.

The gala raised more than $500,000 and will enable IM to continue its work of feeding the hungry, welcoming the stranger and bringing diverse groups of people together for dialogue and service. 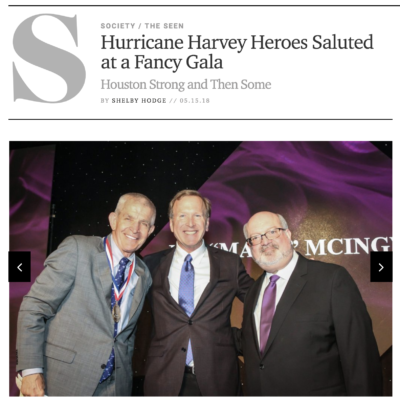