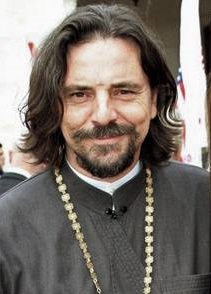 Father Serge Veselinovich was born on October 5th, 1968 in Frankfurt, (West) Germany. He moved to Australia in 1969 with his parents Elijah and Bojka nee Matovich where upon he graduated Fairfield High School in 1986 in the western suburbs of Sydney. He moved to Chicago in 1987, where he entered into seminary at Saint Sava, and after four years of study, was ordained into the holy priesthood. He served briefly in Australia for a total of two years and then moved back to the States.

He is currently the parish priest of Saints Constantine and Helen Orthodox Church in Galveston, Texas. It is the oldest Orthodox church in the state of Texas dating back from 1895 when it was officially consecrated. Although records show that the Orthodox peoples of the Balkans, the Middle East and Russia had started congregating in the 1860s. He has served this small but ever faithful community for the past 22 years.

The series is co-sponsored by Ligmincha Texas Institute, The Jung Center of Houston, MD Anderson Cancer Center, and the Rothko Chapel.