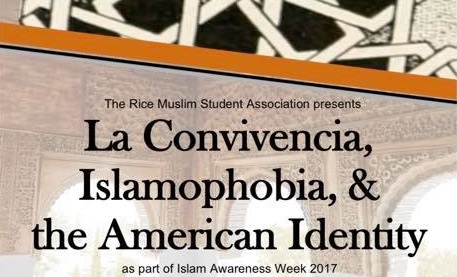 For over 400 years, Muslims ruled the Iberian Peninsula of modern-day Spain, where Jews, Christians, and Muslims lived in harmony with one another. One word has been given to this period of European and Islamic history – la convivencia.

La convivencia is the academic hypothesis and Spanish term meaning “coexistence.” In Muslim Spain, members of the Abrahamic tradition worked together to create one of the world’s centers of learning and science, which ultimately paved the way for the European Renaissance. It was in Spain that Jews, Christians, and Muslims in cities like Cordoba, Granada, and Toledo depended upon one another and learned to understand one another through active interfaith and civic engagement.

La convivencia is a strong antidote for Islamophobia, and it also serves as a framework to strengthen a pluralist America, one that stands for inclusiveness and tolerance. This event, co-sponsored by Islam In Spanish, the Boniuk Institute for Religious Tolerance, the Religion and Public Life Program, and the Muslim Students Association of Rice University, will shed light upon the diversity of Islam and encourage people of all religious backgrounds to work together for the common good.

This event is free and open to the public.

This event is co-sponsored by Rice Muslim Student Association, Religion and Public Life Program and IslamInSpanish